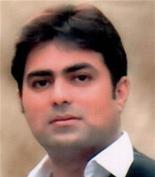 Mr Ali Haider Noor Khan Niazi son of Mr Muhammad Azim Khan Niazi was born on December 15, 1978 at . He obtained the degree of M.A (Political Science) in 2002 from University of the Punjab, . He remained Naib Nazim Tehsil Council during 2000-01. He has been elected as Member, Provincial Assembly of the in general elections 2008. He has travelled to , , , , , and . His uncle, (Retd) Muhammad Nasim Khan Niazi was a Member of Punjab Assembly during 1988-90 and also functioned as Special Assistant to the Chief Minister during this period. His father served as District & Sessions Judge for 30 years.