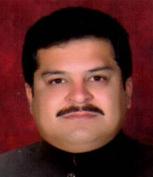 Mr Muhammad Sana Ullah Khan Mastikhail son of Haji Habib Ullah Khan was born on October 21, 1971 at Bhakkar. He obtained the degree of LL.B. in 1996 from , . He was a Member of National Assembly during 2002-07 and also functioned as Federal Parliamentary Secretary for Interior during 2004-07. An agriculturist, who has been elected as Member, Provincial Assembly of the in general elections 2008. He has travelled to , , , , and . During general elections 2002, he won two seats i.e. NA-73 and PP-47. He retained the seat of National Assembly and vacated the provincial seat. In general elections held on 18 February 2008, he had contested for both seats i.e. National and Provincial Assembly.