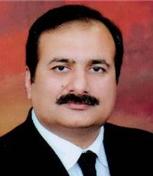 Rana Mashhood Ahmed Khan son of Rana Abdul Rahim Khan was born on August 26, 1966 in Lahore. He belongs to a family having a long standing traditions/history of fighting and sacrificing for just cause. His grandfather, Rana Inayat Khan, was a Member of Legislative Assembly, . His father, Rana Abdul Rahim was not only a senior and highly respectable lawyer but also an active worker for the restoration of democracy during dictatorship. His father served as Secretary Lahore High Court Bar Association, Vice Chairman Punjab Bar Council and Member Pakistan Bar Council.

Rana Mashhood Ahmed Khan obtained the degree of LL.B. in 1991. A practising lawyer who served as Secretary Lahore High Court Bar Association in the year 2001 and has the honour of being elected as the youngest Secretary in the history of Bar. He is also a member of International Bar Association.

He has also served as Chairman Legal Aid Committee (1993), Chairperson of ARD’s Legal Committee and President of Lawyer Forum Punjab. He remained Vice President (Punjab) of Pakistan Muslim League (N) from 2000 to 2008. For the first time in the year 2002, he won the election as Member of the Provincial Assembly of the from constituency PP-149 as a candidate of PML(N). He also contested for the office of Speaker, Provincial Assembly of the Punjab and District Nazim, as a candidate of Joint Opposition.