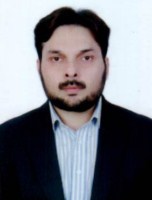 Mr Adnan Farid son of Qazi Ubaid Ullah was born on July 1, 1977 at Bahawalpur. He obtained the degree of LL.M in 2007 from London Metropolitan University, London, UK. A businessman, who has been elected as Member, Provincial Assembly of the Punjab in general elections 2013. He has travelled to UK, Saudi Arabia, Switzerland, Turkey, Spain, China, Thailand and UAE. His maternal uncle, Mr Muhammad Aqil-ur-Rehman was Member of National Assembly during 1997-99; and his cousin, Mr Muhammad Baligh-ur-Rehman served as Member, National Assembly during 2008-13 and is a sitting MNA and is functioning as Minister of State for Federal Education and Professional Training, Interior and Narcotics Control.