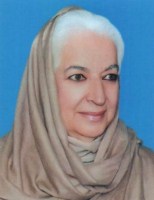 Mrs Zakia Shahnawaz Khan wife of Mr Shahnawaz Khan was born on March 5, 1946 at Isa Khel, Mianwali. She studied at St. Denys School Murree and Queen Marry College, Lahore. During general elections held in 1965, she campaigned with Ms. Fatima Jinnah for revival of democracy in Pakistan against the then ruler and thus started her political career. She served as Member, Provincial Assembly of the Punjab during 1977, 1985-88 and functioned as Advisor to Chief Minister during 1993-96 and 2009-13. An agriculturist, who has returned to Punjab Assembly for the third term in general elections 2013 against one of the sixty six seats reserved for women and is performing the duties of Minister for Population Welfare. She has travelled to Egypt, Turkey, USA, France, UK, Europe, Middle East, Afghanistan, India and Qatar etc. Her father-in-law, Col (Retd) Muhammad Aslam Khan was Member of Punjab Assembly during 1972-77 and 1977.