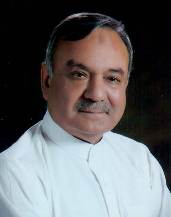 Mr Muhammad Mansha Ullah Butt son of Mr Muhammad Abdullah Butt was born on June 30, 1939 at Sialkot and is a graduate. He served as Member, Provincial Assembly of the Punjab for three consecutive terms during 1990- 93, 1993-96 and 1997-99; and also functioned as Parliamentary Secretary for Labour during 1990-93; as Political Secretary to Chief Minister during 1997-99; and Special Assistant to Chief Minister during 2009-13. A businessman, who has returned to Punjab Assembly for the fourth term in bye-elections held on August 22, 2013 against the seat vacated by Khawja Muhammad Asif, who had won both National and Provincial seats and had opted for NA seat. He is serving as Minister for Local Government & Community Development. He visited China in 1992 as a Member of official delegation of the Punjab Assembly.