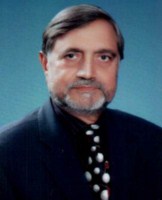 Ch Muhammad Iqbal son of Ch Sultan Ahmed was born on July 6, 1943 inIndia. He graduated in 1963 from Government College, Sheikhupura. Anagriculturist, who consecutively served as Member, Provincial Assembly ofthe Punjab for six terms during 1985-88, 1988-90, 1990-93, 1993-96, 1997-99 and 2002-07; and also functioned as Minister for Revenue, Minister forIrrigation & Power, Minister for Information, Minister for Agriculture, Ministerfor Education, Minister for Food, Minister for Health and as Special Assistantto Chief Minister and Member of Public Accounts Committee during theseperiods. He has returned to the Punjab Assembly for the seventh term in generalelections 2013 and is functioning as Chairman, Committee on Privileges. Hehas travelled to UK, USA and Iran on official visits and visited Malaysia during1996 to attend 42nd CPA Conference.