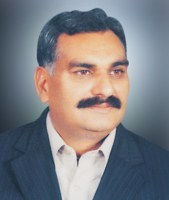 Malik Fiaz Ahmed Awan son of Malik Fazal Hussain Awan was born on September 6, 1960 at Hafizabad and is a graduate. An agriculturist, who was re-elected for the second consecutive term as Member, Provincial Assembly of the Punjab in general elections 2013. He served as Nazim, District Council Hafizabad during 2001-02; as Member Punjab Assembly during 2008-13 and functioned as Chairman, Standing Committee on Labour and Human Resource. His father, served as Member of National Assembly during 1988-90.