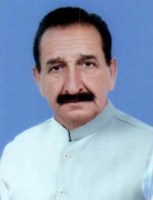 Ch Muhammad Ashraf son of Ch Lal Khan was born on May 6, 1946 at Deona, Gujrat. He graduated in 2009 from University of the Punjab, Lahore. He served as Member, Union Council Deona during 1979-82; as Member, Zila Council for two terms during 1983-91; and as Chairman, Pakistan Bait-ul-Maal, District Gujrat during 1995-96. An agriculturist, who has been elected as Member, Provincial Assembly of the Punjab in general elections 2013. He has travelled to Norway, Germany and Denmark.