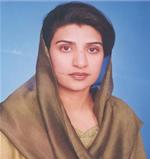 Mrs Farzana Raja wife of Peer Mukarram-ul-Haq was born on January 2, 1970. She graduated in 1989 from University of the Punjab, Lahore. She is a social worker and chairperson of an NGO. She attended National/International Conferences held in USA (1996 & 2000), and in Islamabad (1997). She is engaged in the business of real estate. She has been elected as Member Provincial Assembly of the Punjab in General Elections 2002 against one of the seats reserved for women. Her husband’s grandfather, Peer Elahi Buksh was Chief Minister, Sindh in 1952; her husband’s uncle Kazi Asad Abid remained Member National Assembly during 1993-96; her brother-in-law, Peer Mazhar-ul-Haq was Member Provincial Assembly of Sindh during 1988-99; her husband’s aunt Dr Fehmeeda Mirza was Member National Assembly during 199799 and is a sitting MNA; and her niece, Miss Marvi Mazhar is a sitting Member of Provincial Assembly of Sindh.