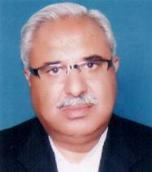 Mian Muhammad Shafiq son of Mian Abdul Sattar was born on November 18, 1956 at Village Jallah Arain, Tehsil Dunyapur, District Lodhran. He graduated in 1977 from Government College, Multan. He served as Tehsil Nazim during 2001-05. A businessman, who has been elected as Member, Provincial Assembly of the Punjab in general elections 2008. He has travelled to UK, USA, Canada and China. His brother, Mian Muhammad Rafiq served as Member of Punjab Assembly during 1993-96 and functioned as Parliamentary Secretary for Transport.