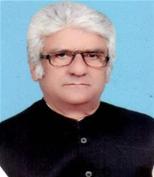 Mian Muhammad Rafiq son of Mian Jamal-ud-Din was born on December 12, 1941 at Toba Tek Singh and graduated in 1963 from Government College, Lahore. An agriculturist, who served as Member, Zila Council Faisalabad during 1979-83 and as Member Zila Council Toba Tek Singh during 1983-85. He remained Member of the Punjab Assembly during 1985-88 and has returned to the Assembly for the second term in general elections 2008. He is an active social worker and a member of several NGOs. He has visited UK and Saudi Arabia. He has visited India in August 2009, on the invitation of Bangladesh, Bharat, Pakistan Peoples Forum (BBPPF) to deliver lectures on peace.