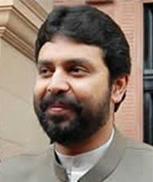 Sirdar Dost Muhammad Khan Khosa is the youngest of the three sons of Sirdar Zulfiqar Ali Khan Khosa, Tumandaar (Chief of Khosa Tribe) and was born on 22nd October 1973 in Lahore. He did his matric and F.Sc. from Aitchison College, Lahore and graduated from University of the Punjab, Lahore. In his college, he was a member of cricket, football and athletics teams and also remained captain of riding team. He has a command over several languages like Urdu, English, Saraiki, Balochi and Persian. He was elected as an MPA in 1999 after his father vacated the seat on becoming Governor Punjab. He was elected unopposed as Naib Zila Nazim of District D.G.Khan in 2006 and resigned as such in 2008 to contest general elections 2008. Having been elected as an MPA, he got elected as the youngest Chief Minsiter of the Punjab and relinquished the charge for Mian Muhammad Shahbaz Sharif. He is presently a member of the Punjab Cabinet with the portfolios of Local Government & Community Development Department, Public Health Engineering, Housing & Urban Development Department and Environment Department. He has extensively traveled abroad. His brother, Sirdar Saif-ud-Din Khan Khosa is a sitting MNA and remained Chairman Zila Council, D.G.Khan twice during 1992-93 and 1998-99. His uncle, Mr Muhammad Amjad Farooq Khan Khosa is a sitting MPA. Another uncle of him, Mr Mohsin Atta Khan Khosa also remained Member of Punjab Assembly during 1990-93, 1993-97 and 1997-99.