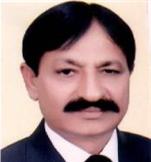 Malik Muhammad Iqbal Channer son of Malik Faiz Muhammad Channer was born on March 15, 1950 at Bahawalpur. He obtained the degree of LL.B. in 1971 from Willayat Hussain Islamia Law College, Multan. A practicing lawyer and an agriculturist, who served as Member, District Council during 1983-93; as Administrator, Market Committee during 1989-93; as Chairman, Market Committee during 1993-94 and as Nazim Union Council No.27 during 2001-02. He served as Member, Provincial Assembly of the Punjab during 2002-07; has been re-elected for the second term in general elections 2008 and remained Minister for Special Education from 09-June-2008 to 29-June-2010 and now is functioning as Minister for Prisons.