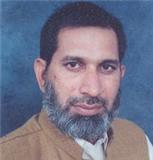 Dr Muhammad Afzal son of Mr Noor Muhammad was born on October 11, 1964 at Bahawalpur. He obtained the degree of MBBS in 1988 from Nishter Medical College, Multan. A general physician and a surgeon, who was a Member of Punjab Assembly during 2002-07; served as Parliamentary Secretary during 2006-07 and has returned for the second term to Punjab Assembly in general elections 2008