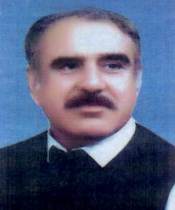 Sardar Nasrullah Dreshak son of Sardar Bahadur Khan Dreshak was born on June 28, 1942 at Kot Bahadur, District Rajanpur. He graduated in 1962 from Government College, Lahore; obtained the degree of LL.B in 1964 from Punjab University Law College, Lahore; and the degree of M.A in 1966 from University of the Punjab, Lahore. He served as Member, Provincial Assembly of the Punjab for five consecutive terms during 1972-77, 1977, 1985-88, 1988-90, 1990-93 and functioned as Minister for Food and Cooperatives during 1973-75; as Minister for Irrigation & Power during 1975-77; as Minister for Irrigation, Law & Parliamentary Affairs during 1988-90; and as Minister for Planning & Development, Law & Parliamentary Affairs during 1991-93. He was also a Member of National Assembly during 1997-99 and 2002-07 and functioned as Chief Whip during 2004-07. An agriculturist and industrialist, who has been elected as Member, Punjab Assembly for the sixth term in general elections 2013. He has travelled to Saudi Arabia, Dubai, China, UK, France and Japan. His father, Sardar Bahadur Khan Dreshak remained Member of West Punjab Legislative Assembly during 1947-49; as Member of Punjab Legislative Assembly during 1951- 55; and as Member of Provincial Assembly of West Pakistan during 1956-58. His eldest son, Sardar Hussnain Bahadur Dreshak was Member of Punjab Assembly during 2002-07 and performed the duties of Minister for Finance. His another son, Barrister Sardar Razza Khan Dreshak and his grandson, Sardar Ahmed Ali Khan Dreshak are sitting MPAs from PP-247 and PP-243 respectively.