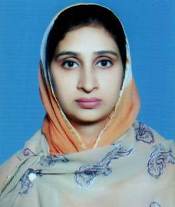 Mrs Iram Hassan Bajwa wife of Mr Hassan Dawood Bajwa was born on May 7, 1980 in Lahore. She obtained the degree of M.A in Human Resource Management in 2005 from University of the Punjab, Lahore. A human resource manager, who served in various private organizations during 2006-09. She has been elected as Member, Provincial Assembly of the Punjab in general elections 2013 against women reserved seat. Her uncle, Fayyaz Virk served as Nazim, Union Council No.75 during 2001-05; and also functioned as Advisor to Chief Minister on Agriculture during 2013.