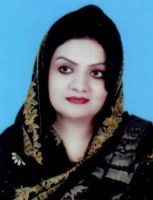 Mrs Madiha Rana wife of Mr Abdul Samad was born on October 15, 1986 in Kuwait. She graduated in 2010 form University of the Punjab, Lahore. She has been elected as Member, Provincial Assembly of the Punjab in general elections 2013 against one of the seats reserved for women. She is a Member of Standing Committee on Social Welfare & Bait-ul-Maal. An active social worker, who is serving as Divisional Chairperson of Auqaf Department, Jahaiz Fund, Faisalabad Division. She is the Provincial President of Women Kabaddi Team of Punjab and City Co-Convener of Sports Youth Festival City Faisalabad. She is also functioning as the Member of Population Control Committee of Faisalabad District. She is the Polio Ambassador of City Faisalabad.