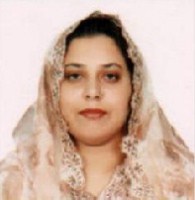 Mrs Zill-e-Huma wife of Malik Omer Farooq was born on November 7, 1977 at Kharian. She obtained the degree of BBA in 1999 from Al-Khair University, Islamabad. A housewife, who was first elected as Member, Provincial Assembly of the Punjab in 2008 and functioned as Chairperson, Standing Committee on Commerce & Investment during 2008-13. She has returned to Punjab Assembly for the second consecutive term in general elections 2013 against one of the seats reserved for women. She has travelled to Dubai, Singapore, Malaysia and Saudi Arabia. Her husband, served as Member Punjab Assembly during 1997- 99.