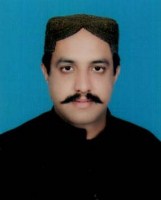 Mr Khurram Abbas Sial son of Mr Amanullah Khan Sial was born on July 14, 1981 and is a graduate. A landlord, who has been elected as Member, Provincial Assembly of the Punjab in general elections 2013. His father served as Member, National Assembly for two terms during 1985-88, 1997-99 and also functioned as Chairman, Municipal Committee Jhang during 1983.