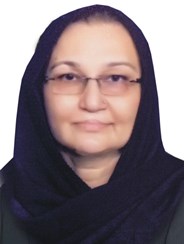 Ms Ashifa Riaz wife of Mr Mohammad Riaz Khan Fatyana was born on January 7, 1964 at Bahawalnagar and graduated in 1990 from University of the Punjab, Lahore. An agriculturist, who served as Member Provincial Assembly of the Punjab during 2002-07 and functioned as Minister for Women Development & Human Rights with additional charge of Social Welfare. She has travelled to USA and UK. She has been elected as Member, Punjab Assembly for the second term in General Elections 2018 and is serving as Minister for Women Development. Her father, Mian Mohammad Afzal Wattoo was Member, Provincial Assembly of the Punjab during 1972-77 and functioned as Senior Minister for Labour, Communication & Works and Excise & Taxation. He also served as Member, National Assembly during 1977. Her husband served as Member Punjab Assembly for three consecutive terms during 1988-90, 1990-93, 1993-96 and also functioned as Adivsor to Chief Minister and Minister for Education and Finance; and has also remained Member of National Assembly for two consecutive terms during 2002-07, 2008-13 functioned as Chairman, Standing Committee on Human Rights and is a sitting MNA. Her son, Mr Ehsan Riaz Fatyana remained Member Punjab Assembly during 2013-18.