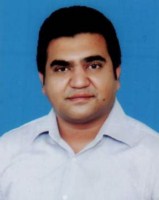 Mian Naveed Ali son of Mr Ahmad Ali was born on June 14, 1987 at Rahim Yar Khan and graduated in 2007 from The Islamia University of Bahawalpur (Rahim Yar Khan Campus). A businessman, who served as Executive Member, Rahim Yar Khan Chamber of Commerce & Industry. He served as Member, Provincial Assembly of the Punjab during 2013-18 and functioned as Parliamentary Secretary for Labour & Human Resource. He has returned to the Punjab Assembly for the second consecutive term in General Elections 2018. He has travelled to Thailand, Saudi Arabia and Malaysia.