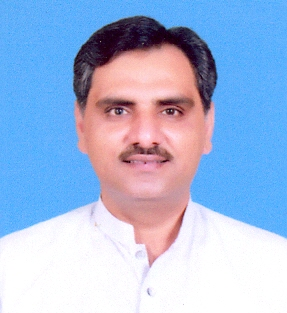 Malik Ghulam Qasim Hunjra son of Malik Muhammad Ajmal Hunjra was born on August 13, 1978 at Kot Addu. He graduated in 1998 from Government College University, Lahore and obtained the degree of M.Sc in 2001 from Quaid-e-Azam University, Islamabad. He served as Vice Chairman, District Council Muzaffargarh during 2016-18. A landlord, who has been elected as Member Provincial Assembly of the Punjab in General Elections 2018. His brother, Malik Ahmad Yar Hunjra was Member of Punjab Assembly for three consecutive terms during 2002-18; and functioned as Minister for Prisons during 2016-18 and his uncle, Malik Sultan Mehmood Hunjra served as Member, Provincial Assembly of the Punjab for four terms during 1985-88, 1988-90, 1990-93, 1997-99 and also functioned as Special Assistant to Chief Minister during 1988-90; and Member National Assembly during 2013-18; and as District Nazim, Muzaffargarh during 2000-05.