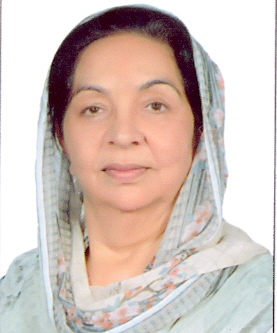 Ms Farhat Farooq wife of Mr Farooq Ahmed was born in 1962 in Lahore and obtained Secondary School Certificate in 1976 from Anjuman Girls High School, Gowalmandi, Lahore. She served as Member, Union Council No.73 during 2002. A house wife, who has been elected as Member, Provincial Assembly of the Punjab in General Elections 2018 against one of the seats reserved for women. She is serving as Member, Punjab Privatization Board; as Member, Quaid-e-Azam Library; and as Member, The Punjab Shehr-e-Khamoshan Authority. Her uncle, Ghulam Haider Wyne functioned as Punjab Provincial Minister for Industries & Mineral Development, Planning & Development and Education during 1985-88; as Chief Minister Punjab during 1990-93; and as Care Taker Chief Minister Punjab during 1990; and her aunt Begum Majeeda Wyne was Member of National Assembly of Pakistan during 2013-18.