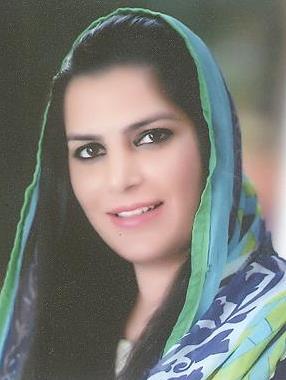 Ms Rabia Naseem Farooqi wife of Mr Kashif Parvez Faruki was born on December 28, 1977 at Gujrat. She graduated in 1998 from University of the Punjab, Lahore. A house wife, who served as Nazim, Union Council No.45, District Council Gujrat during 2005-09; and as Chairperson, Union Council No.217, District Council, Lahore during 2016-18. She has been elected as Member, Provincial Assembly of the Punjab in General Elections 2018 against one of the seats reserved for women. She has travelled to USA, UK, Thailand, Dubai, Europe, China and Saudi Arabia. Her mother, Mrs Shahana Farooqi was also a Member of Punjab Assembly during 1988-90 and her sister, Ms Khadija Umar served as Member, Punjab Assembly during 2002-07, 2008-13, 2014-18 and is a sitting MPA from W-362. Her father, Mr Naseem Farooqi served as Vice Chairman, Gujrat Municipal Corporation during 1988.