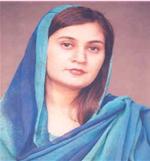 "Humaira Awais Shahid is a journalist and human rights activist in Pakistan and a parliamentarian for the Provincial Assembly of Punjab elected on reserved seats. Born and raised in Kuwait, Shahid earned an M.Phill degree in English at the University of the Punjab. She joined the Khabrain group of newspapers, where as part of the Khabrain helpline and editor women pages she worked closely with victims of violence, rape and acid crimes, reporting their grievances and seeking remedies. As an Editor of English daily newspaper The Post, she has rich and diverse understanding and experience of media and news management in Pakistan.

She is an active voice in the Parliament and tabled many resolutions against violent customary practices, forced marriages, acid crimes, rights of women and minors. She was the first parliamentarian to pass a law as a private member, in the face of sustained opposition from government departments and political leadership. Her legislation, the Punjab Prohibition of Private Money lending Act, 2007, prohibited interest-based private money lending in Punjab and was replicated in KPK Provincial Parliament.

US’s Bowdoin College, Maine has conferred the Honorary Baccalaureate 2012 Degree of Doctor of Humane Letters upon Ms. Humaira Awais Shahid in May 2012.

As a lead advocate for International Violence against Women Act (IVAWA) she reintroduced and testified for IVAWA in the US Senate and Congress and has advocated for IVAWA on a global level. She participated in the reintroduction of IVAWA in the House of Representatives and Senate on February 4, 2010 and testified in Tom Lantos Human Rights Commission in USA House of Representatives on April 15, 2010.

As a 2009-10 Fellow at Radcliffe Institute for Advanced Study, Harvard University,  Ms Shahid explored the subject of violence and women in the socio-cultural context of the Muslim world, particularly Pakistan.  She is currently working on issues of Bai Salam (Interest free Agricultural System of Islam), The Economic system of Islam, women economic empowerment, food security and agricultural reforms.