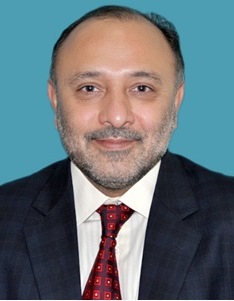 Syed Yawar Abbas Bukhari son of Syed Manzur Hussain Bukhari was born on October 10, 1964 in Karachi. After obtaining his initial education from Army Burn Hall School Abbottabad, he completed Diplomas in Business Studies in 1984 and 1985 from Greenwich College, London, UK finishing with Bachelors degree as a major in Product Development. A businessman, who served as Vice Chairman, Municipal Committee Attock during 1997-99; and has been elected as Member, Provincial Assembly of the Punjab in General Elections 2018. He has been functioning as Chairman, Public Accounts Committee-II since 2018 and is also serving as Minister for Social Welfare & Bait-ul-Maal. He travelled to Germany in 2019 as a Member of Parliamentary Delegation representing Punjab. His uncle, Syed Ejaz Hussain Bukhari remained Chairman, District Council Attock during 1984-87 and served as Member of the Provincial Council of the Punjab during 1983-84. He was Member of Punjab Assembly for two terms during 2002-07 and 2013-18. His youngest uncle, Syed Wajid Hussain Bukhari served as Federal Minister for Environment, Local Government & Rural Development Division in Care-Taker Government of 2007-08. His cousin, Syed Zulfiqar Abbas Bukhari is functioning as Special Assistant to the Prime Minister with the status of Minister of State on Overseas Pakistanis and Human Resource Development.