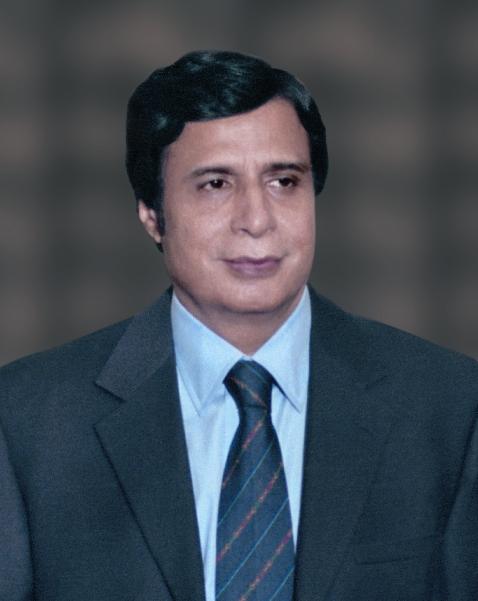 Mr Parvez Elahi son of Chaudhry Manzoor Elahi was born on November 1, 1945. He graduated in 1967 and obtained Diploma in Industrial Management from London. He hails from a distinguished political and industrial family. An industrialist and a veteran politician, who served as Chairman, District Council Gujrat during 1983-84; and has successively been serving as Member of the Provincial Assembly of the Punjab and National Assembly of Pakistan since 1985. He functioned as Minister for Local Government & Rural Development for three terms during 1985-88, 1988-90, 1990-93 and served as Acting Leader of the Opposition in the Punjab Assembly during 1993-96. He has the honour to serve as Speaker of the Punjab Assembly during 1997-99. Having been elected in General Elections 2002, he was elected as Chief Minister of Punjab and functioned as such till 2007. He served as Member of the National Assembly for two consecutive terms during 2008-13 and 2013-18. In 2008, he served as Leader of the Opposition in the National Assembly of Pakistan. He functioned as Federal Minister for Defence Production and Industries during 2011-13. In 2012, he was appointed as the first ever Deputy Prime Minister of Pakistan. In General Elections 2018 he won two National Assembly seats and one Provincial Assembly seat, however, he retained his provincial seat and was re-elected as Speaker of the Punjab Assembly for the second time. His cousin, Chaudhry Shujaat Hussain is a veteran politician of the country who has also served as Prime Minister of Pakistan. His son, Mr Moonis Elahi also remained Member of Punjab Assembly for two consecutive terms during 2008-13, 2013-18 and is a sitting MNA.