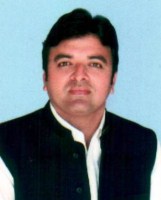 Rana Mannan Khan son of Ch Maqbool Ahmed was born on October 1, 1976 at Sialkot and graduated in 1996 from University of the Punjab, Lahore. A businessman, who remained Member, Provincial Assembly of the Punjab during 2013-18 and has returned to the Punjab Assembly for the second consecutive term in General Elections 2018. Being a Member of Punjab Assembly he attended National Security Workshop at National Defence University, Islamabad. He has travelled to UK, Turkey, Saudi Arabia, China, UAE and Thailand.