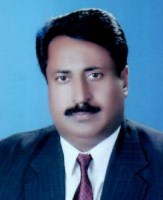 Rai Haider Ali Khan son of Rai Salah-ud-Din Khan was born on March 23, 1967 at Faisalabad. He graduated in 1986 from Government College University, Lahore and obtained the degree of LL.B in 1990 from Punjab University Law College, Lahore. An agriculturist, a businessman and an advocate, who remained Member Punjab Assembly during 2013-18 and functioned as Special Assistant to Chief Minister on Literacy & Non-Formal Basic Education during 2013-16 and as Advisor to Chief Minister on Tourism during 2016-18. He has returned to the Punjab Assembly for the second consecutive term in General Elections 2018. He has extensively travelled abroad. His grandfather, Rai Shahadat Khan served as Member, Punjab Legislative Council during 1924-26, 1927-30; Punjab Legislative Assembly during 1937-45, 1946-47 and West Punjab Legislative Assembly during 1947-49. His father, remained Member National Assembly during 1985-88 and 1997-99; and his father-in-law, Lt. Col (R) Muhammad Saleem Khan remained MNA during 1965-69.