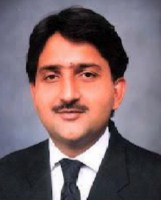 Malik Muhammad Ahmad Khan son of Malik Muhammad Ali Khan was born on November 29, 1971 at Kasur. He obtained the degree of LL.B. (Hons.) in 1998 from University of Buckingham; and is a practicing lawyer. He remained Member, Provincial Assembly of the Punjab during 2002-07 and functioned as Parliamentary Secretary for Parliamentary Affairs. He returned to the Punjab Assembly for the second term in 2013 and served as Special Assistant to Chief Minister on Information & Culture during 2016-18. He has been re-elected as Member of this Assembly for the third term in General Elections 2018. His father, served as Member Punjab Assembly during 1972-77; and as Senator during 1985-94. He also functioned as Deputy Chairman Senate during 1986-88.