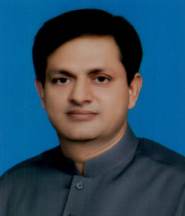 Rana Babar Hussain Abid son of Haji Ali Muhammad was born on August 18, 1973 at Mian Channu. He graduated from Hailey College of Commerce in 1994 and obtained the degree of MBA in 1996 from Philippines School of Business Administration, Manila, Philippines. An agriculturist, who served as Member, Provincial Assembly of the Punjab during 2008-13, 2013-18; functioned as Parliamentary Secretary for Finance, as Chairman, Punjab Land Record Authority (PLRA), as Member PAC-II and House Committee during 2013-18. He has been re-elected as Member, Provincial Assembly of the Punjab for the third consecutive term in General Elections 2018. He has travelled to Philippines, Chile, USA, Kenya, Japan and UK. To his credit, he has publication-cum-MBA thesis titled “Comparative Study of Three Leading Car Companies in Philippines (Marketing Strategies)” published in 1996.