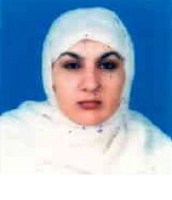 Ms Naghma Mushtaq wife of Malik Mushtaq Ahmad was born in 1968. She remained Member, Provincial Assembly of the Punjab during
2008-10 and 2013-18; functioned as Parliamentary Secretary for Population Welfare during 2013-16; and as Minister for Zakat & Ushr during 2016-18. She has returned to the Punjab Assembly
for the third consecutive term in General Elections 2018.