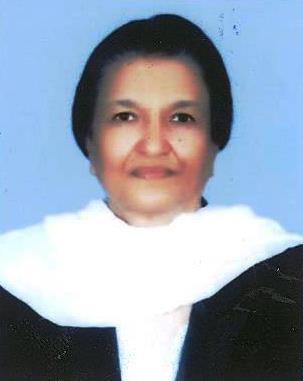 Ms Shamsa Ali wife of Mr Majid Ali Syed was born on December 25, 1946 in Lahore. She obtained the degree of LL.B. in 1982 from S.M. Law College, Karachi. She received Fullbright Scholarship in 2008 and was the Fulbright Visiting Scholar and taught a Programme at the University of Nebraska, USA on Gender in Islam. An Advocate, who has been elected as Member, Provincial Assembly of the Punjab in General Elections 2018 against one of the seats reserved for women. She has been practicing law for more than 35 years and has multiple publications to her credit. Her area of professional expertise is Gender studies/Women in Islam; legal and constitutional status of women in Pakistan; and legal reforms vis-a-vis basic genuine human rights. She has organized, chaired and participated in numerous national and international conferences, seminars and workshops. She remained Member, Legal Aid Committee, Lahore High Court Bar Association during 2001; Member, Executive Committee, Supreme Court Bar Association during 2003-04; Member, Federal Government Monitoring Committee for Women Development; and Vice Chairperson, Steering Committee for Women Development, Government of the Punjab. She received the Madar-e-Millat Award from Government of the Punjab; Member of Honour Award 2000 by All Pakistan Women’s Association (APWA); and Award for Meritorious work in 2001 by the Ministry of Social Welfare & Women Development Punjab. She has travelled to UK, Canada, USA, France, Saudi Arabia, Iraq, Iran, UAE, India, Singapore, Europe, Thailand, China and Kenya.