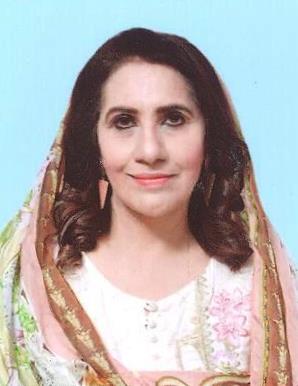 Ms Uzma Kardar was born on April 8, 1956 in Lahore. She graduated in 1980 from Kinnaird College, Lahore. An educationist, who has been elected as Member, Provincial Assembly of the Punjab in General Elections 2018 against one of the seats reserved for women and is functioning as Chairperson, Standing Committee on Gender Mainstreaming. An educationist for the past 30 years, she has been writing articles for different Newspapers since 2008. She served as Councillor, District Council Lahore during 1992-97. She is an official media spokesperson of Punjab Government. She is serving as Member, Board of Governor, Punjab Curriculum & Textbook Board Lahore; as Member, Syndicate, Lahore College for Women University; and as Member, Kashmir Committee Punjab. She has travelled to USA, UK, Far East, India, Australia and Middle East. She attended National Security Workshop Course 20 at National Defence University, Islamabad and secured highest position and was selected to make a presentation on behalf of the entire batch in front of President of Pakistan. Her husband, Mr Tahir Hussain Kardar remained Chairman, Khidmat Committee and Chairman, Union Council No.207, Lahore.