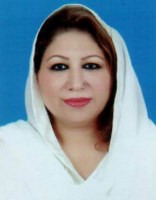 Ms Saadia Sohail Rana wife of Mr Shahid Sohail Rana was born on April 23, 1968 in Lahore. She graduated in 1989 from University of the Punjab, Lahore. A house wife, who remained Member, Provincial Assembly of the Punjab during 2013-18 and served as Member, Standing Committees on Communication & Works and Population Welfare. She has returned to the Punjab Assembly for the second consecutive term in General Elections 2018 against one of the seats reserved for women and is functioning as Chairperson, Standing Committee on Excise & Taxation. She has extensively travelled abroad.