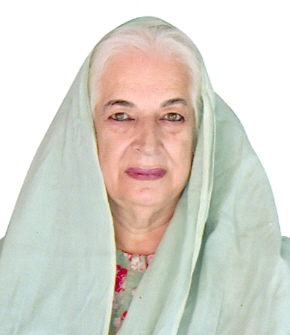 Begum Zakia Khan wife of Mr Shahnawaz Khan Niazi was born on March 5, 1946 at Isa Khel. She is a matriculate and studied at St. Denys School Murree and Queen Mary College, Lahore. During the General Elections held in 1964, she campaigned with Ms. Fatima Jinnah for revival of democracy in Pakistan and thus started her political career. She served as Member, Provincial Assembly of the Punjab during 1977, 1985-88, functioned as Advisor to Chief Minister during 2009-13 and performed the duties of Minister for Population Welfare during 2013-18. A house wife and a politician, who has returned to Punjab Assembly for the fourth term in General Elections 2018 against one of the seats reserved for women and is functioning as Chairperson, Standing Committee on Environment Protection. She served as Member Senate Punjab University during 1986; and as Member, Board of Management Committee Services Hospital Lahore during 2013. She is serving as Member, Executive Committee Punjab Council of Arts; as Member, Executive Committee Punjab Halal-e-Ahmer; and as Member, Khidmat Committee District Mianwali. She represented Pakistan in United Nations on 47th Session of the Commission on Population and Development at New York, USA during 2014. She has travelled to Europe, USA, Canada, North Africa, Middle East, Kashmir, Afghanistan and India. Her father-in-law, Col (Retd) Muhammad Aslam Khan Niazi was Member of Punjab Assembly during 1972-77 and 1977. Her three brothers have served as Member Provincial Assembly of the Punjab; Mr Abdul Hafeez Niazi during 2008-13 and functioned as Parliamentary Secretary for Zakat, Ushr and Bait-ul-Mal; Mr Abdul Razzaq Khan Niazi during 1985-88 (and functioned as Chairman, Standing Committees on Information and S&GAD), 2002-07, 2013-18; and Mr Abdul Rehman Khan during 1993-96; functioned as Minister for Prison during 1995-96 and is a sitting MPA from PP-85 for the second term.