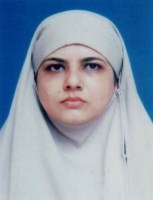 Mrs Gulnaz Shahzadi wife of Mr Shujaat Ali Shah was born on April 18, 1968 in Lahore. She obtained the degrees of B.Sc (Biology, Chemistry) in 1987; B.Ed and M.Ed from University of the Punjab, Lahore. She was active in politics since her college days and was a student leader. An educationist and a business lady, who remained Member, Provincial Assembly of the Punjab during 2013-18 and has returned to the Punjab Assembly for the second consecutive term in General Elections 2018 against one of the seats reserved for women. She served as Science Teacher in Aitchison College, Lahore during 1987-93 and is currently CEO and Administrator of private Schools. She has authored a book titled, “Magic of Letters” which helps to develop and enhance pronunciation skills of children as well as helps in building blocks of words. Since 1998, she has been setting up free summer camps during vacations in remote areas with the aim to reduce illiteracy rate and to connect with the community of children. She is working effortlessly and tirelessly for the promotion of education. She has visited USA, Thailand and South Africa. She participated in International Visitors Leadership Program held in USA in collaboration with United States Department of State Bureau of Educational and Cultural Affairs. Her husband, served as Member, District Council during 1998-99; and as Tehsil Nazim, District Sialkot during 2000-02.