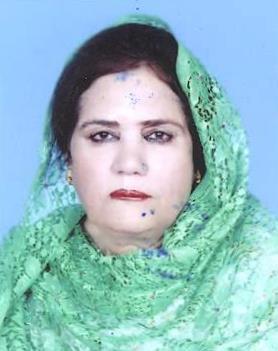 Ms Khalida Mansoor wife of Ch Khalid Bashir (Late) was born on September 14, 1941 at Faisalabad. She obtained the degree of M.A. (Political Science) in 1964 from University of the Punjab, Lahore. A political activist, who served as Member, Municipal Corporation Faisalabad during 1979-83, 1984-88 and 1994-99; as Member, District Council, Faisalabad during 2001-02; and  as Vice Chairperson, District Bait-ul-Maal Committee, Faisalabad. She served as Member, Provincial Assembly of the Punjab during 2002-07; as Member, National Assembly during 2008-13 and 2013-18. She has been re-elected as Member, Provincial Assembly of the Punjab for the second term in General Elections 2018 against one of the seats reserved for women. She has travelled to USA, Saudi Arabia, Korea, Nepal, China, Mali and Thailand.