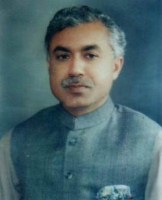 Mian Mumtaz Ahmed son of Mian Allah Dad was born on September 8, 1955 at Mohar Sharif, Chishtian. He graduated from Government College, Lahore in 1973 and obtained the degree of LL.B in 1976 from Punjab University Law College, Lahore. He remained Member, Provincial Assembly of the Punjab during 1988-90 and 1993-96 (Parliamentary Secretary for Revenue) and Member, District Council Bahawalnagar during 1987. An Advocate and an agriculturist, who has returned to Punjab Assembly for the third term in general elections 2013.