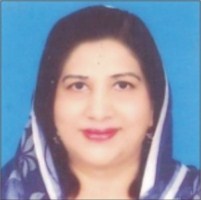 Dr Najma Afzal Khan wife of Rana Muhammad Afzal Khan was born at Faisalabad. She obtained the degree of MBBS in 1976 from Liaquat Medical College, Hyderabad, Jamshoro; attended one year Diploma Course in (Child Health) from Postgraduate Medical Institute, Lahore during 1985-86; and Hospital Management Course from NIPA, Lahore during 1996. She served as General Physician, Ministry of Health, Government of Saudi Arabia, Riyadh during 1978-85. She has been serving as Member, Board of Management, Allied and DHQ Hospital and Nursing Schools Faisalabad since 2011. A political activist and a women’s rights campaigner, who functioned as Chairperson, Management Committee of Women Crises Center during 2008-14; as Member, Zakat & Ushr Committee, District Faisalabad during 2010-13; and has been elected as Member, Provincial Assembly of the Punjab in general elections 2013 against one of the seats reserved for women. She has activiely participated in flood relief efforts at Muzaffargarh and Isa Khel during 2010. She has travelled to UK, USA, France, Italy, Switzerland, Germany, Norway, Austria, Egypt, Dubai, Saudi Arabia and Singapore. She has visited Sri Lanka and Malaysia to attend Commonwealth Parliamentary Association Conferences. Her husband was Member of Punjab Assembly during 1997-99, 2008-13 and is a sitting MNA.