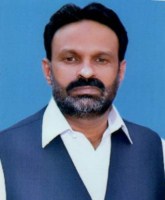 Ch Ashraf Ali Ansari son of Ch Sardar Ali was born on September 15, 1969 at Sheikhupura. He obtained the degree of B.Sc in 1992 from University of the Punjab, Lahore. A businessman, who served as Nazim, District Assembly Gujranwala during 2005-07; and as District Coordinator, Health Department Gujranwala during 2009-11. He has been elected as Member, Provincial Assembly of the Punjab in general elections 2013.