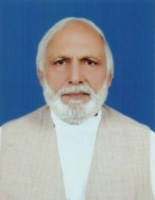 Pir Ghulam Fareed son of Sahibzada Malik Didar Ali was born on December 26, 1942 at Gujranwala. An agriculturist, who served as Member, District Council Gujranwala for two terms during 1979-85 and as Member, Provincial Assembly of the Punjab during 1985-88. He has returned to the Punjab Assembly for the second term in general elections 2013. His daughter, Ms Shazia Ashfaq Mattu remained Member of Punjab Assembly during 2008-13 and functioned as Vice Chairperson, Chief Minister’s Task Force for Women Development, Punjab. She is a sitting MNA.