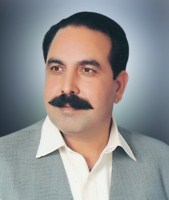 Ch Muhammad Asad Ullah son of Ch Muhammad Hasan was born on June 4, 1968 at Jalalpur Bhattian. He obtained the degree of LL.B. in 1994 from University of the Punjab, Lahore. A businessman, who served as Naib Nazim, Tehsil Council during 2000-05 and as Member, Punjab Assembly during 2008- 13 and functioned as Parliamentary Secretary for Energy. He has returned to Provincial Assembly of the Punjab for the second consecutive term in general elections 2013 and is serving as Parliamentary Secretary for food. He has visited Dubai, India, UK, Turkey, Marakish, Italy, Poland and Saudi Arabia.