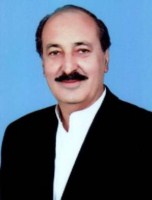 Mr Abdul Razzaq Khan son of Nawabzada Abdul Ghafoor Khan was born on July 7, 1950 at Murree. He graduated in 1970 from Forman Christian College, Lahore. An agriculturist, who served as Member/Opposition Leader, District Council Khanewal during 1987-90. He was first elected as Member Provincial Assembly of the Punjab in 1985 and also functioned as Chairman, Standing Committees on Information and S&GAD. He was re-elected as Member, Punjab Assembly in 2002. He has returned to Provincial Assembly of the Punjab for the third term in general elections 2013. He has visited UK, USA, Dubai, Bangkok and Saudi Arabia. He belongs to a renowned and well-known political family. His uncle, Mr Muhammad Saif Ullah Khan, Isa Khel was Member of Punjab Legislative Council for three terms during 1921-1930; his uncle, Mr Ghulam Qadir Khan (Khan Bahadur) served as Member, Punjab Legislative Assembly during 1937-45; his another uncle, Col (Retd) Muhammad Aslam Khan, remained Member Provincial Assembly of the Punjab during 1972-77 and 1977; his sister, Mrs Zakia Shahnawaz served as Member Punjab Assembly during 1977 and 1985-88 and is presently functioning as Minister for Social Welfare; his brother, Mr Abdul Rehman Khan was Member of Punjab Assembly during 1993-96 and functioned as Minister for Jails as well as Advisor to Chief Minister; another brother of his, Mr Abdul Hafeez Khan Niazi served as Member Punjab Assembly during 2008-13 and functioned as Parliamentary Secretary for Zakat, Ushr and Bait-ul-Maal; and his cousin, Mr. Maqbool Ahmad Khan was Member of National Assembly during 1985-88 and served as Minister of State for Religious and Minorities Affairs.