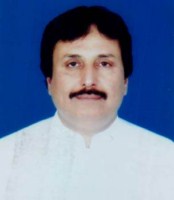 Mr Ejaz Khan son of Mr Shamroze Khan was born on April 10, 1967 in Rawalpindi. He graduated in 1990 from University of the Punjab, Lahore. A businessman, who served as Member, Provincial Assembly of the Punjab during 2013-18 and has been re-elected as Member, Punjab Assembly for the second consecutive term in General Elections 2018. He is functioning as Parliamentary Secretary for Chief Minister Inspection Team. He has travelled to Saudi Arabia, Dubai and Sri Lanka.